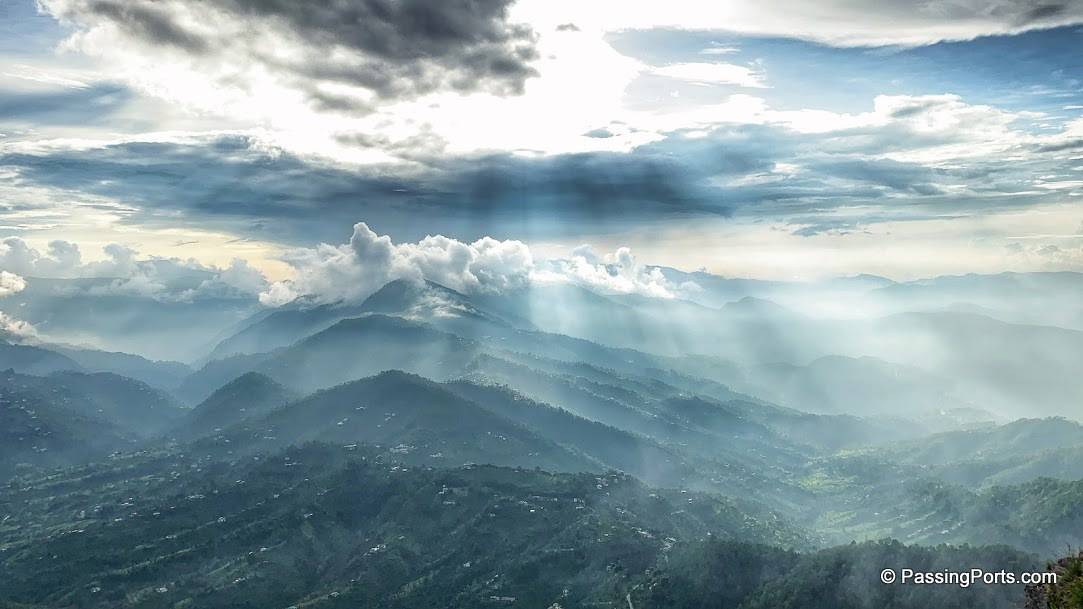 Everyone gets excited the minute someone says, “We are going to explore Leh or Goa on a two-wheeler”. I have two things to tell everyone who is reading this,

We randomly booked tickets to Delhi during the usual airline sale to decide later on our destination. Come July, and we had to zero in on what our plan was and where we were headed with four days in hand.

Bus from Kashmiri Gate to Haldwani

Bike Rental from Haldwani and back

Flight back to Chennai

Bike Rental Contact: Himalayan Swastik Bike Rental (+91 9971513119). They have new and well-maintained bikes, and we recommend them!
Stay:
Kausani: Sun N Snow Inn
Mukteshwar: Zostel Mukteswar
Nainital – Langsdale Lodge (Not on Airbnb yet? Use this link to sign up and get free credits)
Expense: ₹ 44,369

The bus that we booked via Redbus was not really the ideal sleeper bus. Having no other choice, and thankfully with an hour or so delay, we got down at Haldwani at about 0700 hrs. Otherwise, the bus would have reached at 0530 hrs ish and we would have had to sit on the roads with no sleep. The time we got down was perfect for breakfast and to freshen ourselves considering a long ride ahead. 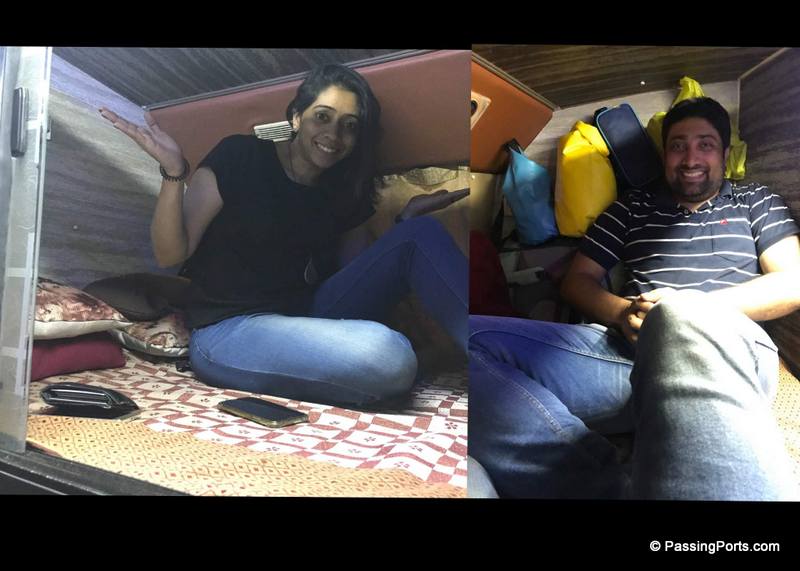 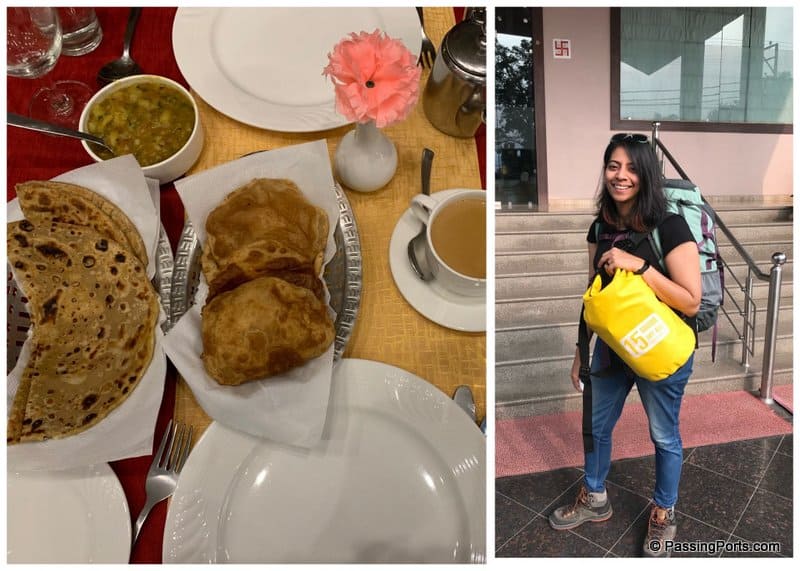 Breakfast point: Hotel Devashish – a pretty decent place for breakfast and definitely the place to freshen up 🙂

The bike rental opened at 8 am, and the bikes were ready for us to pick up and zoom. Rainy days were predicted; however, the weather was the best for the ride with many beautiful mountains and landscapes sights. Thus began our motorcycling around Uttarakhand, more precisely the Kumaon Hills. 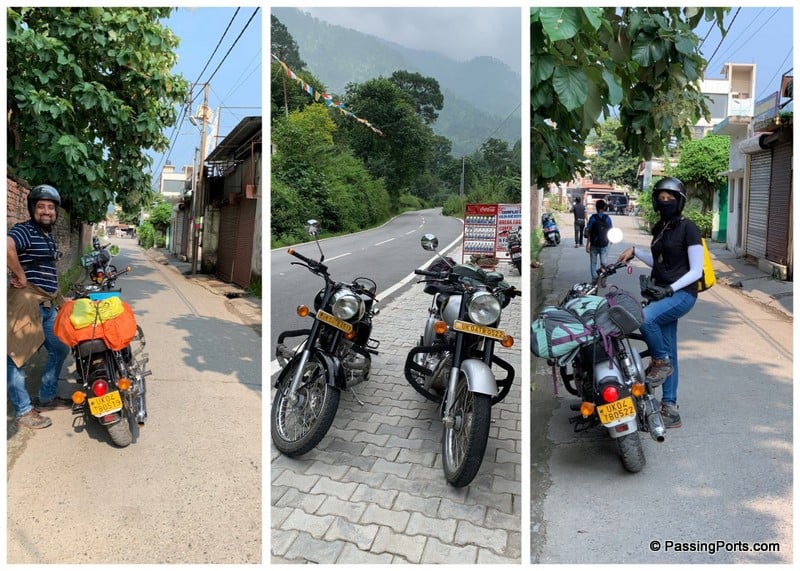 Route map of day one in Uttarakhand

We drove via Bhimtal Lake, slowly beginning to enjoy what the state of Uttarakhand had to offer. Known for being the HQ of Kumaon Regiment of Indian Army, a 9-Hole Golf Course, Jhula Devi Temple, amazing views of Nanda Devi and Mount Trishul and the 9th Century Katarmal Sun Temple, Ranikhet is fast growing as a favourite. 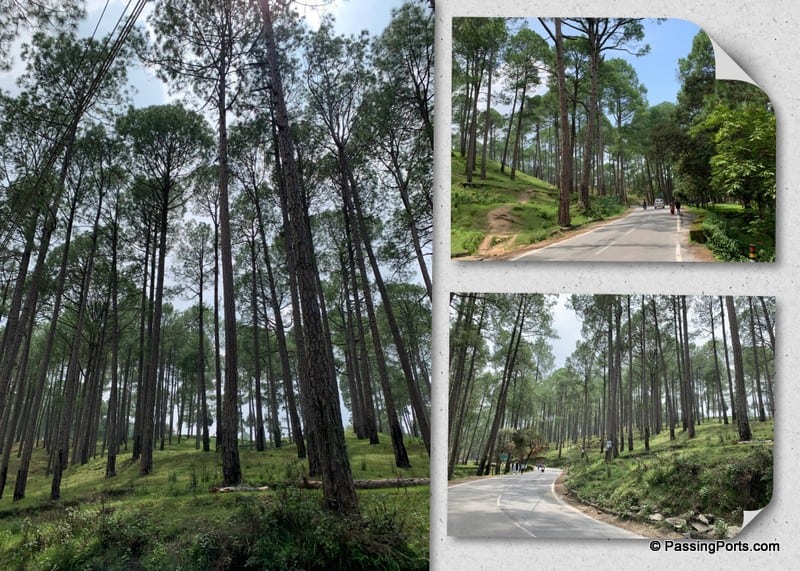 From Ranikhet, we drove towards Majkhali. One of our impromptu pit stops at a fantastic cafe (now run by Oyo Rooms) offered stunning views. 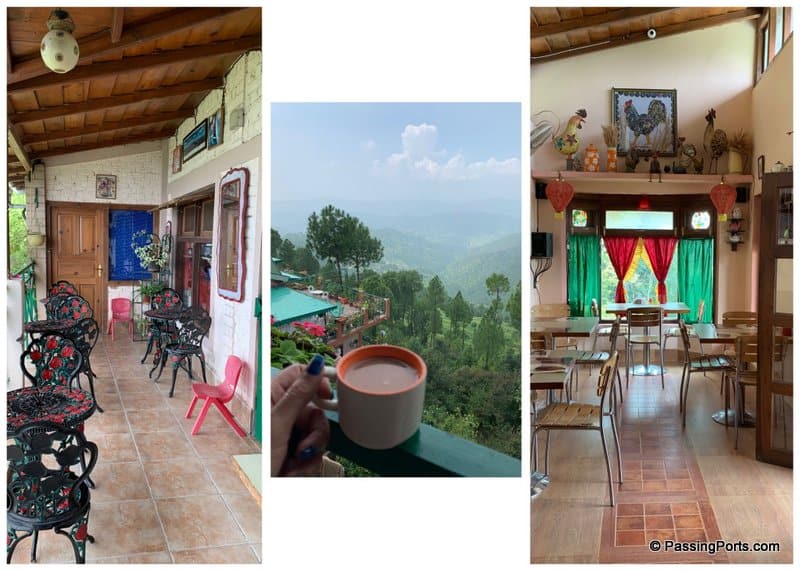 Majkhali, which is located 12 km from Ranikhet, is at a higher altitude, thereby offering great views. We rode along nicely laid roads, fresh air and views to die for. The roads were curvy with many hairpin bends. We finally reached Kausani by 1600 hrs.

Kausani is a tiny village in northern Uttarakhand, and every property must be offering fantastic views. We will vouch for the place we stayed in – Sun N Snow Inn and every room offers excellent views if not the terrace. 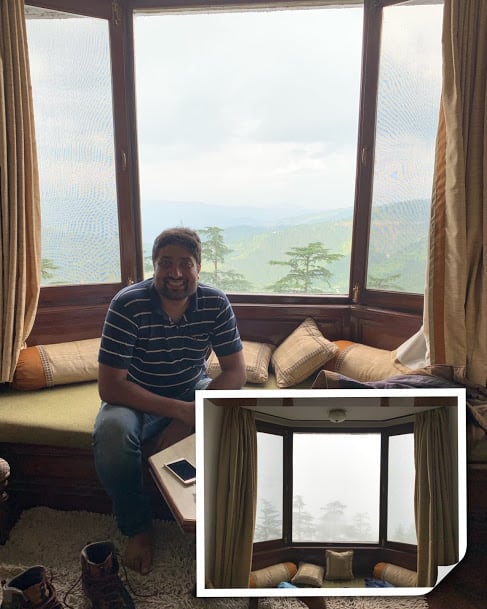 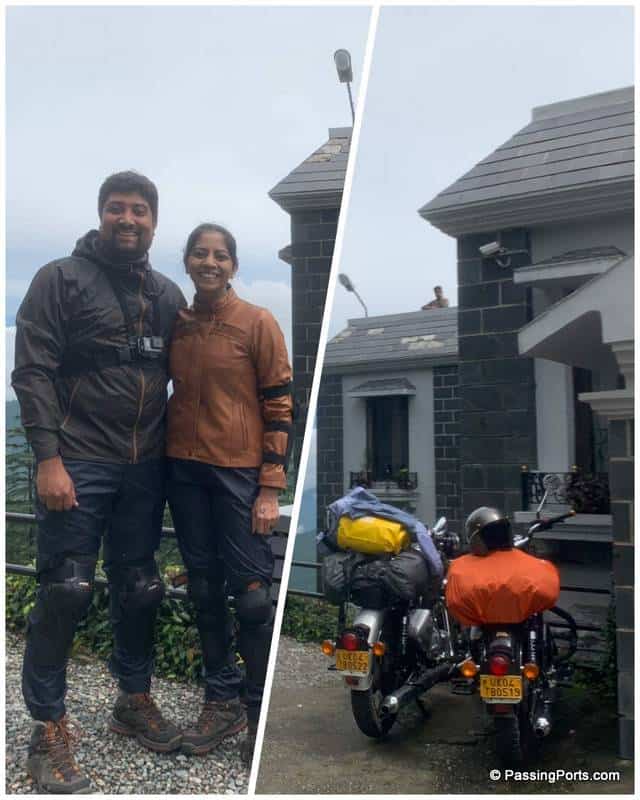 After resting and re-energised, we were ready to say goodbye to Kausani only by 1130 hrs. We learnt as we rode via Someshwar to Almora that there are many famous temples in and around those places. So if you are up to it, make sure you pay a visit. 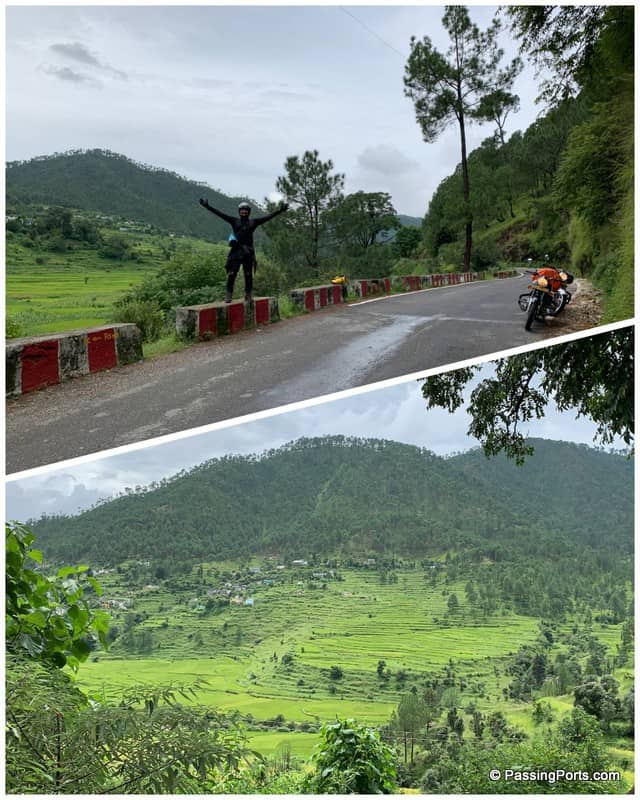 While the ride to Almora was so beautiful through Kosi village with the flowing river and really tall trees, the town in itself was quite shocking.

With so many houses nestled on this mountain, there was a sudden sadness that crept through us. To see how nature was not the same as Kausani and painted concrete was so much more, we rode to the main town. We reached the hub at about 1400 hrs and halted at a tiny shop for lunch. Maggi, daal chawal, bajji and chai made us happy 😀 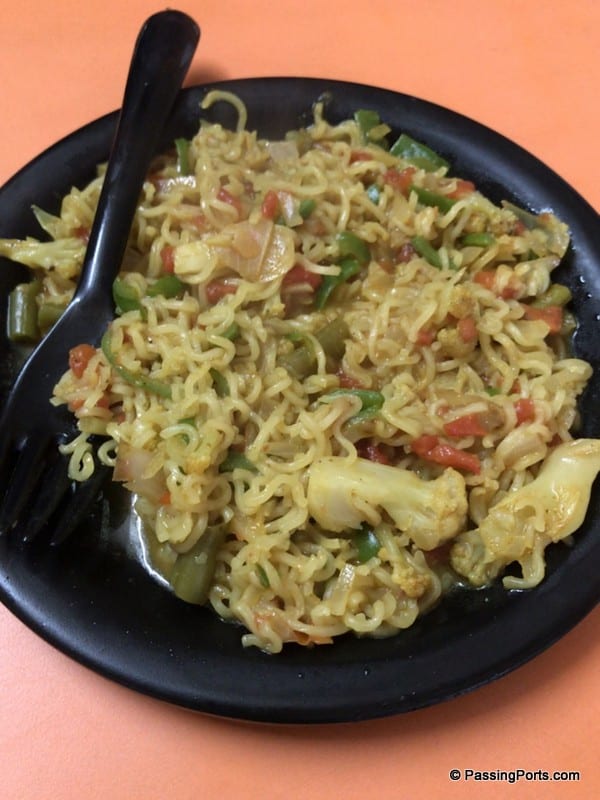 As we approached Mukteshwar, we were welcomed by mist all around us and a ride inside a forest. Expect no roads, place enough for a single car, muddy and slippery and misty. We were jumping with joy and took as much care to enjoy this entire moment. After passing a checkpoint, we went to visit one of the best viewpoints in Mukteshwar.

A mighty and famous Shiva Temple is nestled here, which is 350 years old. Mukteshwar was known as Muktesar in the olden days and was renamed post-independence. Once the temple visit is done, walk towards Chauli is Jali, which is on the other side.

This place offers not just stunning views, but also rappelling and zip-lining. After spending about an hour enjoying the views of the Kumaon hills, we rode to our hostel on the other side of the village. Rested and met few interesting travellers that night in Zostel. 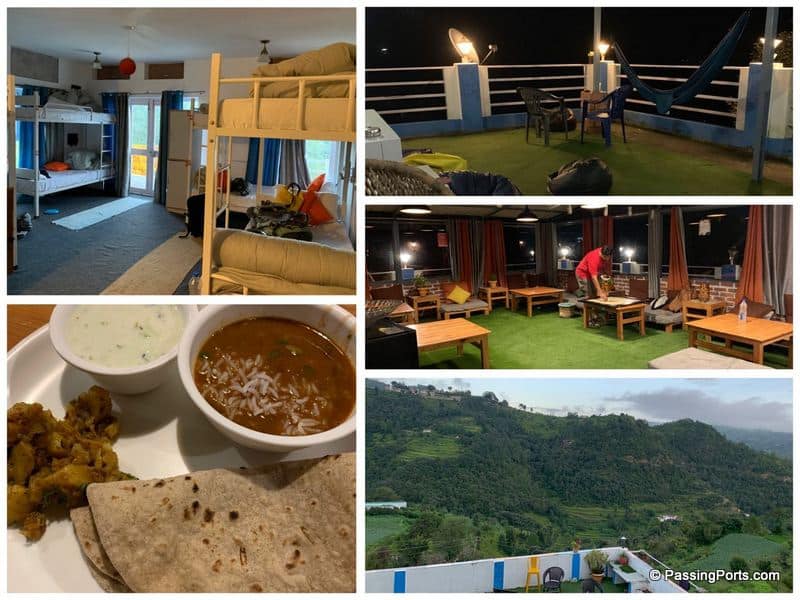 Next day early morning we rode to the famous waterfall before leaving Mukteshwar. Bhalu Gaad waterfalls in Dhari Village is a cute little place to spend your time with nature, hop over a few stones, enjoy the sound birds chirping and the river flowing. We had Maggi for breakfast in a small chai shop near the entrance of the waterfalls called Lucky Restaurant and also left our bikes and belongings with the owner.

The waterfall opens at 0800 hrs, and we halted at the first waterfall, thinking that was it. We did not know there was another, a bigger one and we missed going all the way to see it, but we were happy that we got to see something out of our little experience. So ensure you don’t make the same mistake we did 😀

We rode our way to Naukuchiatal only to be welcomed by no tourists (1050 hrs). I mean there was no one in the lake, and that made us take a boat ride (20 mins) which made us feel like the entire lake and everything around it was ours. Such bliss 🙂 The lake has nine corners, and so they named it Naukuchiatal.

From here, via Bhimtal, we reached Sattal and again welcomed by nature and no humans (1200 hrs). Pristine water, absolute silence with only sound of birds and you – Sattal Lake was a beauty.

After this, we left to hit the queen of all mountains in Uttarakhand – Nainital. The roads leading to the city was just beautiful, again misty yet beautiful. Once we reached the main lake area, we imagined how beautiful the place would have looked with no people here as well.

Nainital Lake on photos do no justice to what it looked when we saw in person. The road (Mall Road) was filled with vehicles, people on phones talking loud, people walking all around you, but then there was this sudden silence. The second we got to see the lake, we automatically stopped and just told each other, “How beautiful is this place :)”. For those few secs, I was thanking the Gods for showing such a beautiful sight. Oh, the silence lasted for about 10 secs, and the vehicle honking just took over.

We checked into a beautiful Airbnb property in Nainital by 1330 hrs, a cute bedroom just perfect for two people. Our warm hosts (Rohan and Achla) with a sweet little angel helped us with some advice on what to do in Nainital. Rohan spoke with so much passion about the city and made us feel we needed to have extended the trip by another day or so. For lunch, we went to Anupam Restaurant in Bara Bazaar which serves one of the best Kumaoni Thali, and this is a must-try. 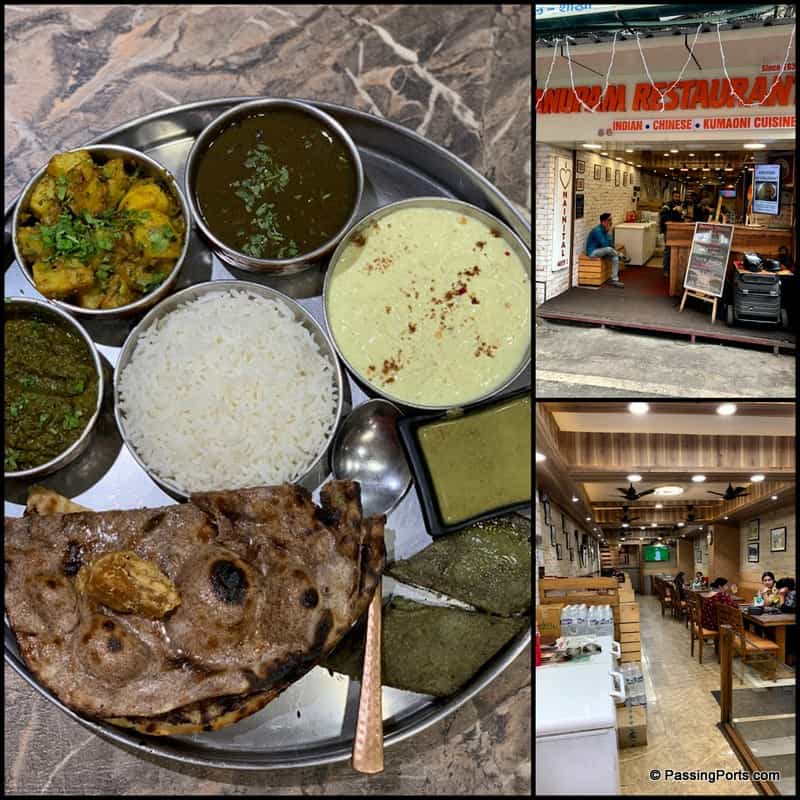 Tiffin Top is a famous touristy things to do in Nainital, which is a 5-6 km return and can be covered either by walk or on a horse. Two horses, Rani and Reshma took us to Dorothy Seat and a couple of other viewpoints. This will take about one to one and a half hours. 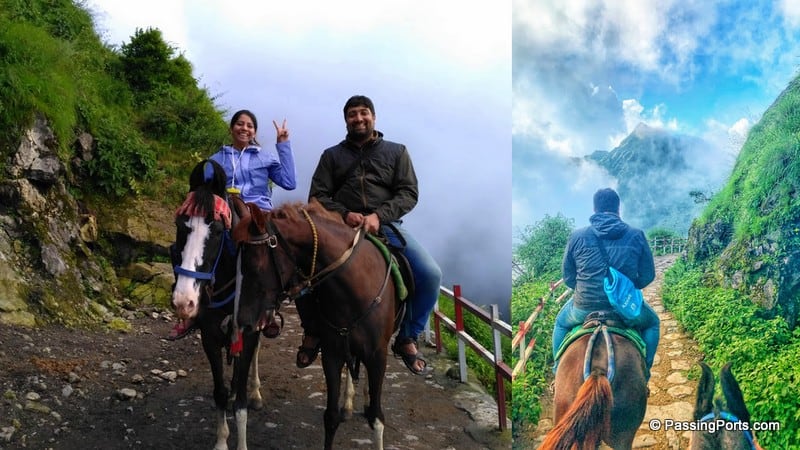 The Mall road is open for pedestrians at night. One can walk along the road to pick a restaurant from many for dinner. Gianni restaurant served us so-so food while we were told Purohit was a nice place to try. 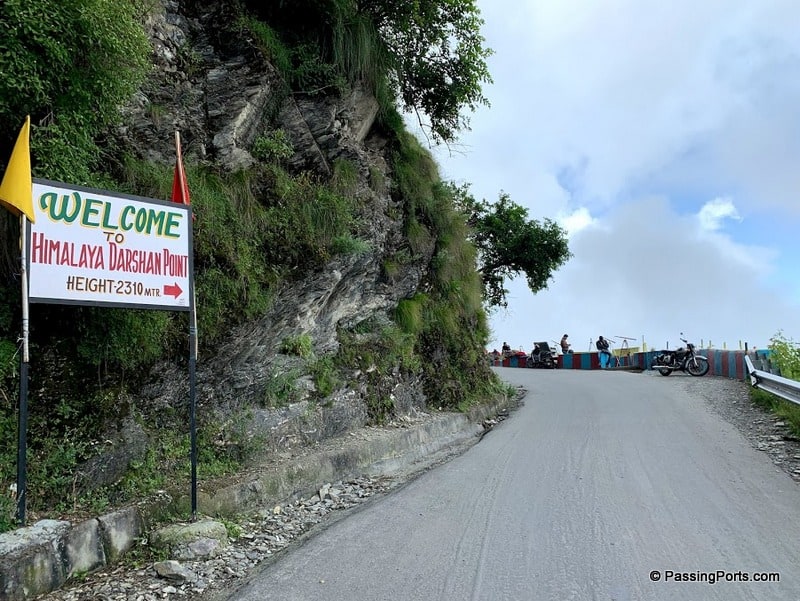 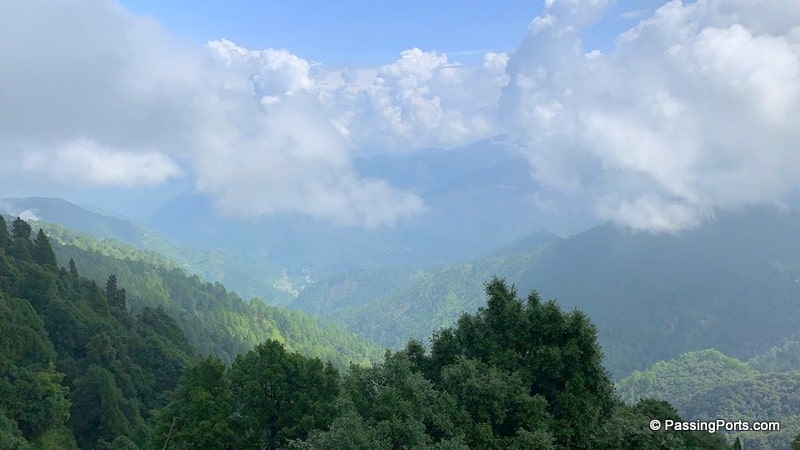 Next morning, we left on our two-wheelers to see the snow viewpoint as the rope car starts only at 1030 hrs. As we had to leave to Kathgodam, we chose to also visit the Himalaya Darshan which I’m sure on clear days will look lovely with Nanda Devi and Trishul peaks looking stunning in all its glory. 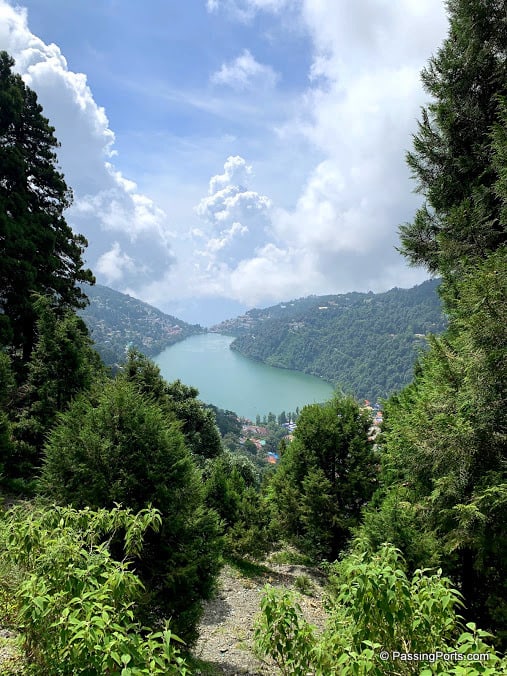 The mango shaped Nainital lake viewpoint is on the way to Himalaya Darshan. Before leaving Nainital, we also visited the Governor’s House. Not every Raj Bhawan allows public inside, and we were delighted to know that the Raj Bhawan in Uttarakhand, which is located in Nainital is accessible, but with a guide. This Scottish looking building is nicely located within a golf course and huge green lawns all around. 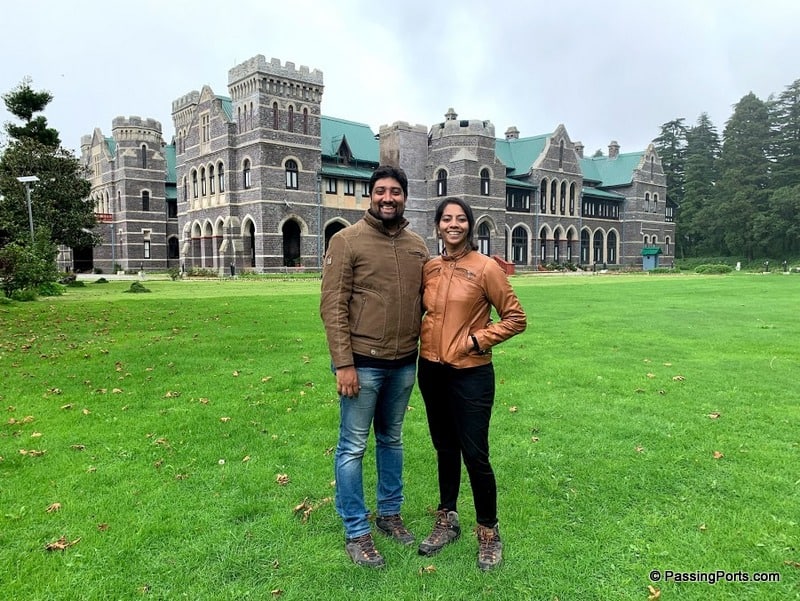 As we bid goodbye to our hosts, we wanted to see if we could visit the Khurpatal Lake from the Sunset Point. Due to the heavy fog that day, we had to give it a pass. 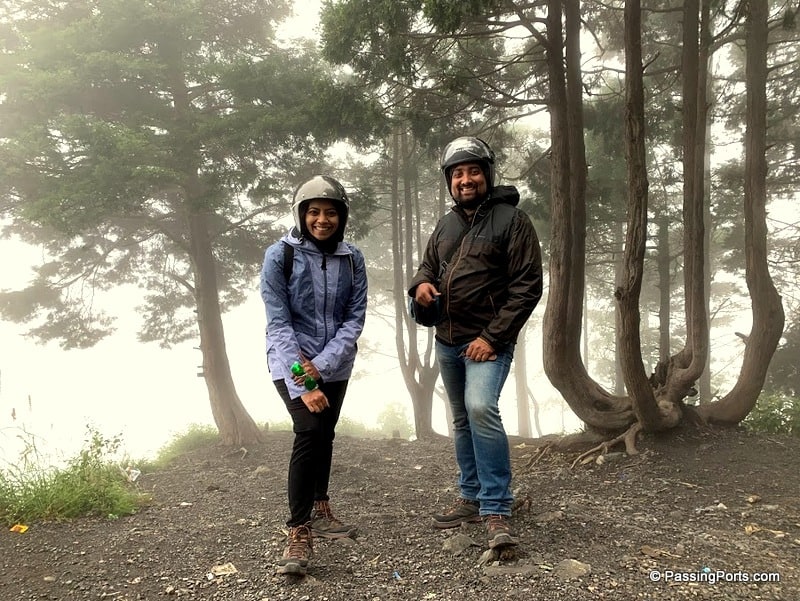 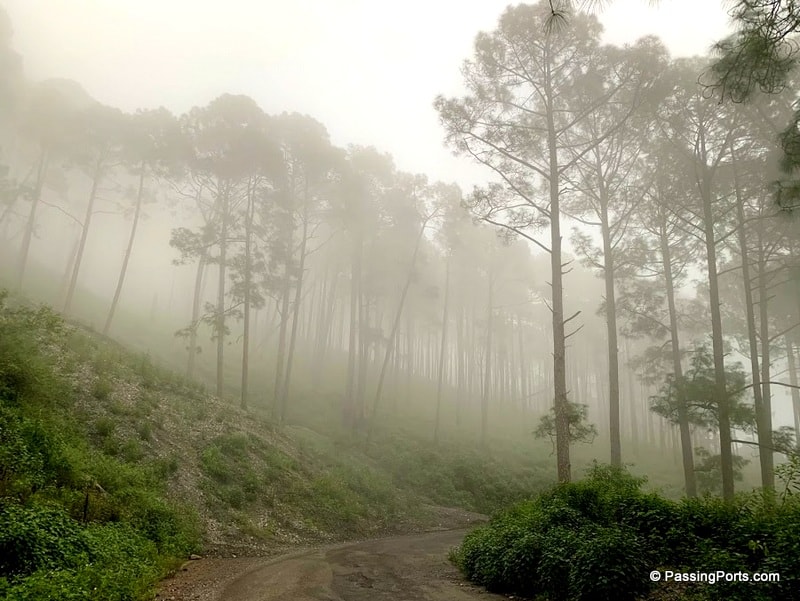 With this, we wrapped our trip of Uttarakhand and reached Haldwani to return our bikes and catch the Shatabdi to NDLS. We reached New Delhi by 2100 hrs, checked into our hotel to catch the early morning flight to Chennai.

To more of Uttarakhand in the future, cheers and explore the beauty of this world, not tomorrow but today!