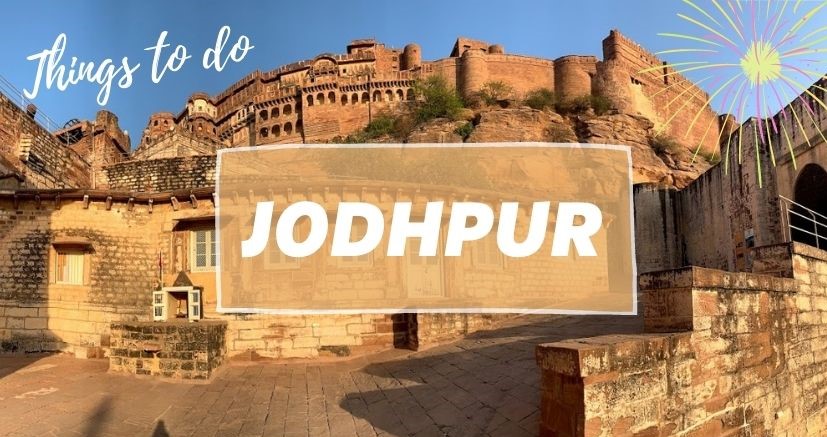 Welcome to Jodhpur, famously known as the Blue City of India, situated at the border of the mighty Thar Desert. Also known as Sun City, Jodhpur is Rajasthan’s second-largest city after Jaipur and one of the most photographed because of the (not so) blue houses. In case you were wondering, Jodhpurs (breeches) got their name because they originated from this princely city.

Trivia: These pants were designed by the Jodhpur Maharaja’s son, Pratap Singh, and worn by his polo team when visiting The Queen of England in 1897.

We recently spent a few days in Jodhpur. After researching online, talking to locals and fellow travellers, we made a must-do list of things to do in Jodhpur, which will guide anyone visiting this beautiful city.

Rajasthan is famous for its forts, and Jodhpur doesn’t disappoint. One of India’s largest forts, the Mehrangarh Fort stands on a rocky hill about 400 feet above the city and definitely ranks as one of our favourite things to do in Jodhpur.

The Mehrangarh Fort is spread across 5 kilometres with walls that are up to 118 feet tall (36 metres) and is exceptionally well maintained by the erstwhile rulers’ family. You get to see opulent rooms, balconies, furniture and cannons of various shapes and sizes. The museum within the Fort also has artefacts from a different era. These give us an insight into the lives lived by the rulers of the past.

Our favourite part of the Mehrangarh Fort was the room where the Maharaja supposedly entertained his visitors. P.S: We found a fancy set of Pachisi with a cloth board (the original version of Ludo).

Mehrangarh Fort has its own share of darkness. Don’t miss out on seeing the handprints of 31 ladies (apparently 6 wives and 25 mistresses of one of the Maharajas) before they committed Sati.

Do remember to set aside half a day for Mehrangarh Fort. You will not be disappointed!

Jaswant Thada is a cenotaph (commemorative tomb) built by Maharaja Sardar Singh in 1899, honouring his father, Maharaja Jaswant Singh II. Currently, it also serves as the cremation ground for the Royal Rajput family of Marwar.

The Jaswant Thada is built out of intricately carved sheets of marble. These sheets are thin and polished, emitting a warm glow when illuminated by the Sun.

After all the walking at the Mehrangarh Fort, Jaswant Thada is the perfect place to relax your legs while enjoying eye-catching views of the Fort and the Blue City.

3. Fly on the ziplines with Flying Fox Jodhpur

Do NOT miss this one if you are an adventure lover, especially since you end up ziplining across the Mehrangarh Fort. Flying Fox Jodhpur comprises 6 ziplines that take approximately 60 to 90 minutes to complete.

Preethika and I had super fun ziplining and would totally recommend this activity in Jodhpur to one and all.

Don’t miss: One of the ziplines takes you right on top of the “Batman – The Dark Knight Rises” shooting spot, so keep your eyes open for that one!

Our suggestion: Choose the evening or the last slot to do ziplining. The fort looks beautiful when the sun sets and we totally recommend this as an evening activity in our things to do in Jodhpur list.

4. Have tea in a multitude of roadside tea shops

In case you haven’t been told already, people of Rajasthan love their masala chai, and Jodhpur is no exception. Masala chai is milk brewed with tea leaves along with ginger, cloves and cardamom. It is absolutely yummy, and to be honest, it is difficult to find a bad cup of masala chai anywhere in Jodhpur.

Toorji Ka Jhalra means Toorji’s Stepwell and is one of the hidden gems in Jodhpur. This stepwell was restored recently, uncovering over 200 feet of beautiful hand carvings. Built-in the 1740s by Maharaja Abhay Singh’s consort, this stepwell served as a drinking water source for the area surrounding it.

Currently, the Jodhpur Stepwell is the unofficial local swimming pool for boys of all ages.

6. Spend a relaxing evening gazing at the Mehrangarh Fort from the rooftop of Open House Cafe

After roaming around the whole day, if you want to rest your tired legs, have a drink and soak in some magnificent sights of the Mehrangarh Fort, Open House Cafe is the place to be.

Situated right next to Toorji Ka Jhalra, Open House Cafe has perhaps the best views of the Mehrangarh Fort. And in case you are luckier than us, you’ll also get to see the Fort lit up beautifully! A definite thing to do in Jodhpur in the evening, wouldn’t you agree? 🙂

7. Visit the famous Om Banna Temple, where a Royal Enfield (or Bullet) motorcycle is worshipped

Now here is a fascinating story and quite out of the ordinary. Here’s a bit of history from Wikipedia:

In December 1988, Om Banna (his real name was Om Singh Rathore) was travelling from a small town near Pali to Chotila (both in Rajasthan) when he lost control of his motorcycle and hit a tree. He died on the spot, whereas the Royal Enfield motorbike fell into a nearby ditch. The morning after the accident, local police took the motorcycle to a nearby police station.

The next day it was reported to have mysteriously disappeared from the station. Even more strangely, it was found back at the site of the incident. Police, once again, took the motorcycle, this time emptying its fuel tank and putting it under lock and key. Despite their efforts, the following day, it again disappeared and was found at the accident site. Legend says that the motorcycle kept returning to the same ditch. It thwarted every attempt by the police to keep it at the local police station; the motorcycle always returned to the same spot before dawn.

This came to be seen as a miracle by the local population, and they began to worship the “Bullet Bike.” News of the miracle motorcycle spread to nearby villages, and later they built a temple to worship it. This temple is known as “Bullet Baba’s Temple.” It is believed that Om Banna’s spirit helps distressed travellers.

This temple is about 60 km away from Jodhpur, so we recommend you do this first thing in the morning. On the way, don’t forget to stop at this small town called Rohat and eat yummy kachoris at Prahlad Chand Mangilal. It was by far the best kachori both Preethika and I have ever eaten!

8. Opt for an offroad experience, spot blackbucks, interact with the Bishnois and participate in the opium ceremony

The Bishnoi tour was high on Preethika’s things to do in Jodhpur list, and it didn’t disappoint. We booked the 2pm slot via Klook, and after about an hour’s drive from Jodhpur, we entered the arid lands. It was all about spotting a few migratory birds, deers, the beautiful nilgai (nil = blue, gai = cow) and last but not the least, the (in?)famous blackbuck!

We were super kicked to see the blackbuck (partly thanks to Mr Khan) and the nilgai (big but gentle creatures!). However, the same amount of “wowness” wasn’t shown towards the gentle deer, much to the guide’s dismay.

After this, we moved on to meet with the village folks and met with the local block printers (bedsheets), the potter (I tried my hand at it and failed miserably) and the weavers.

Now here’s the controversial bit. We also took part in the Opium ceremony, a part of the Bishnoi tribal culture. Yes, Opium is banned in India, but the authorities turn a blind eye to it in Rajasthan because it is part of their culture.

This ritual is said to be over 1000 years old, and the Bishnois greet visitors to their home with Amal, an opium drink. Hence, this ceremony is also known as the “Amal Ceremony”.

Only the menfolk participated in this ceremony, but did you think Preethika would have passed on this opportunity? Of course not!

You’ve seen numerous photos of Jodhpur, and the houses are all blue and thought, when we go there, all we are going to see is blue, right? Wrong. Yes, Jodhpur is called the Blue City, and it was perhaps all blue at some point in time, but now you literally have to hunt for these blue houses.

History says that the houses surrounding the Mehrangarh Fort belonged to brahmins, and to distinguish their homes from the rest, they were painted blue. However, times have changed, and most of these folks have changed their houses’ exterior colours over time. Only a few blue homes remain.

Where to find the blue houses of Jodhpur

There are two main areas where you can find these blue houses. First is Navchowkiya, which is one of the best places in Jodhpur to find blue buildings. Getting here requires a roughly 20-minute walk or 10-minute rickshaw ride from the central points of Ghanta Ghar clocktower and the Sardar Market area. Second is Chandpole, which is an area right next to Navchowkiya.

It is hard to give you specific streets since most of these have no name, are narrow, and you will have to walk quite a bit. However, talk to the shopkeepers once you are in the vicinity. They will be more than happy to help you.

10. Eating out in Jodhpur

Jodhpur is heaven for foodies. Right from the famous dal baati churma, to the Rajasthani thaali, to roadside chaat, it offers something or the other for everyone. We’ll let our photos do the talking here!

1 thought on “Things to do in Jodhpur, India”