With the D-day coming closer (the US electronics ban for airlines goes into effect on March 25, here’s everything you need to know about the electronics ban enforced by the United States), all the affected airlines have started communicating with their audiences one way or another. In short, passengers on airlines from the Middle East and Africa are not allowed to carry any electronic gadget along with their cabin luggage. Instead, passengers are expected to check them in along with rest of their luggage.

Royal Jordanian kicked off their communication when they tweeted a pic titled “12 things to do on a 12-hour flight with no laptop or tablet”, which has since then gone viral. Here it is.

Emirates came out with a video campaign featuring Jennifer Aniston soon after the ‘US electronics ban’ was announced. Yesterday, Emirates also announced a “free” laptop and tablet handling service for the benefit of their passengers, beautifully turning the difficult issue into a positive marketing campaign, making it a big win for their customers. I had anticipated that Etihad Airways and Qatar Airways would also offer a similar service for the benefit of their customers but looks like we’ll have to wait for a little more time for that.

Thanks to their strategic alliance with Etihad Airways, Jet Airways ends up flying a lot of people from India to Abu Dhabi, which is Etihad’s hub before Etihad takes over and flies further, to different parts of Europe and the United States. Given that crucial connect, Jet Airways has issued a travel advisory for passengers flying to the US and UK. 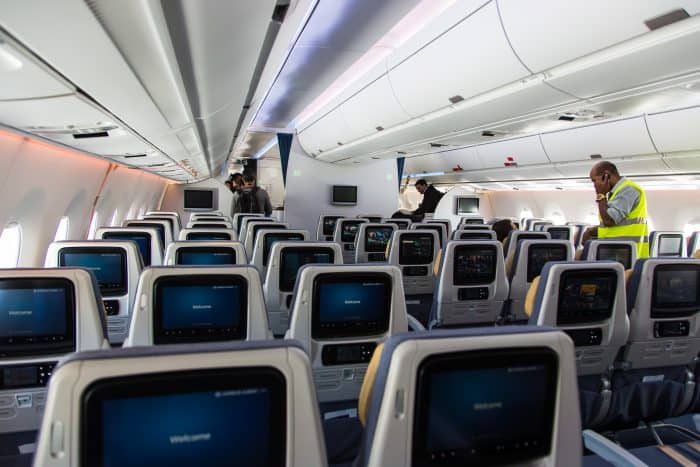 Restrictions to the United States of America

In line with additional security measures introduced by the United States Department of Homeland Security (US DHS), effective March 25, 2017, and until further notice, guests are advised not to carry the below listed personal electronic devices as cabin baggage on any Jet Airways international flight, and connecting onto the United States of America from:

Please ensure you DO NOT carry any electronic device above the size of a smart phone in your cabin baggage and, or in person if through checked-in to the United States of America.

These include, but not limited to:

Restrictions to the United Kingdom

In light of the changes to the aviation security measures announced by the United Kingdom Department of Transport, guests will not be allowed to carry personal electronic devices such as phones, laptop and tablets on any Jet Airways international flight, and connecting onto the United Kingdom from:

Please ensure you DO NOT carry any electronic device in your cabin baggage, or in person which are larger than:

The above devices must be placed in the check-in baggage at the point of origin airport, to avoid any further inconvenience to your journey into the United States of America or the United Kingdom.

While it is rumoured that the US electronics ban is an effort to help the American carriers to increase their market share, the carriers from the Middle East are showing the world why they are the real leaders of the airline industry. Hope to see a lot of movement as far as the electronics ban is concerned in the coming days.

Are you flying to the US or UK anytime soon? What are you doing to escape from this electronics ban?