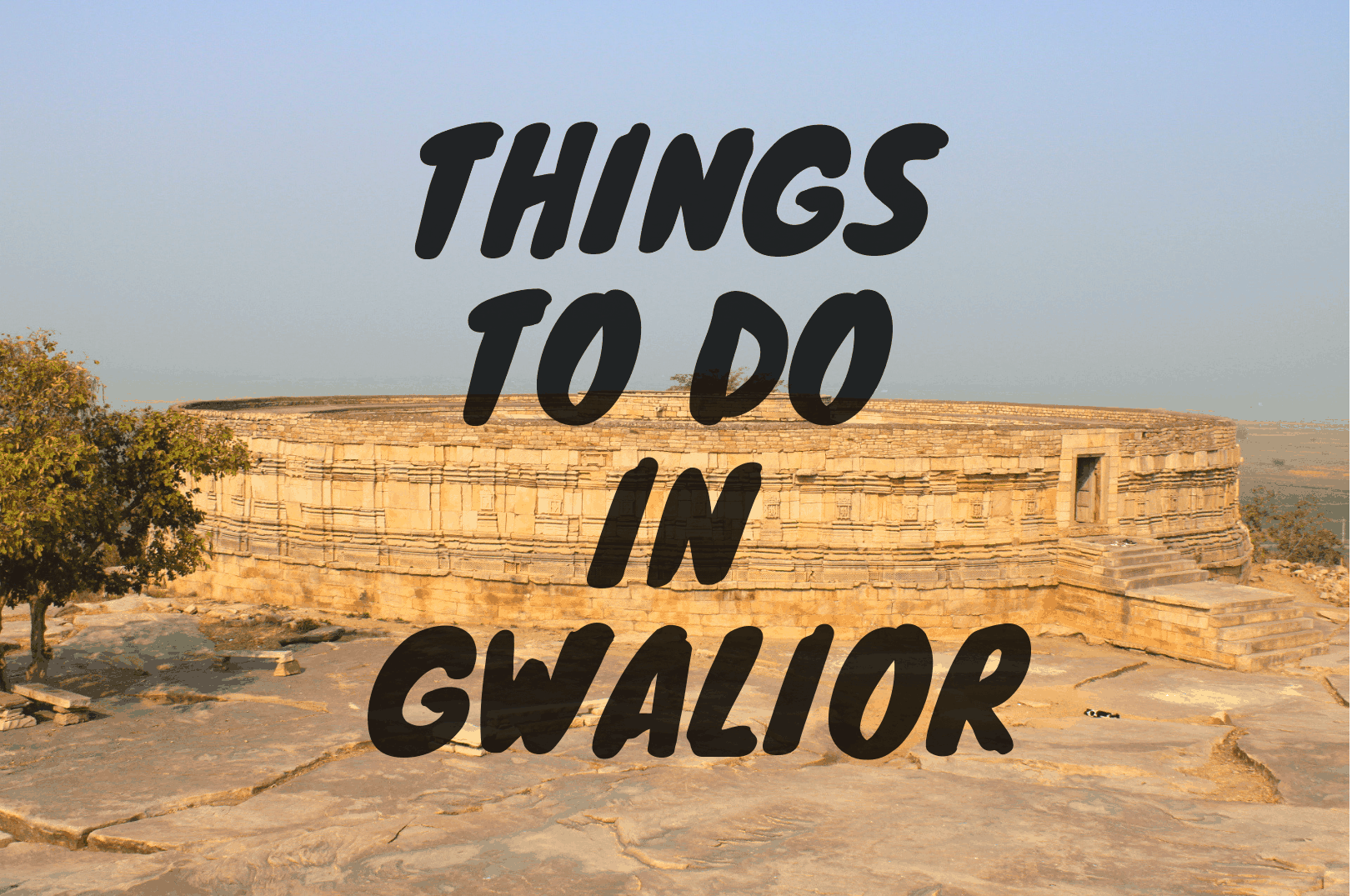 We all plan our trips to Jaipur, Hampi, Mahabalipuram etc. and experience the grand old structures built by Cholas, Pandiyas and Mughals amongst others to experience history and those golden eras. I have now found my new love, and after visiting Gwalior, my hearts beats to explore more of Madhya Pradesh and the amazing history this state also holds. Let me first lure you with Gwalior with some exciting things to know 🙂

This heritage property was once home to the Scindia dynasty, built by
Maharaj Jayaji Rao Scindia in 1880. Located right next to Jai Vilas Museum, this was a great stay, and Gagan was brilliant. Food was a big letdown – we believe that it was catering more to the needs of foreigners’ taste buds (?) than ours. Nonetheless – we definitely recommend staying here.

Once you are in the central city, at quite a distance, the fort of Gwalior is prominent that at first, you will not want to take your eyes off it. A large structure that runs for miles; this was a beauty we couldn’t wait to step foot on. This fort comprises of two palaces, many temples including Jain temples, Gurudwara other than Hindu temples.

Places to visit inside Gwalior Fort

Man Singh Palace has been passed on to many dynasties, and the Palace gets its name from the king who built it – Man Singh Tomar around the 10th century. Unlike many palaces, Man Singh Palace exterior looks unique and beautiful. The Tomars passed the palace on to the Mughals, then the Marathas, the British and at last to the Scindias.

The stories here are fascinating, and one would need a lot of time to go around, hear the stories and be a part of this beautiful piece of history.

Don’t miss the Sound and Light show at night – they play in Hindi and English.

Suraj Ka Kund: Story is King Suraj Sen, who had leprosy, accidentally met with a sage named Gwalipa in his house while he was wandering the forests (inside the fort). Wanting water, he asked the sage for some. He was asked to drink water from the nearby pond which not only took care if this thirst but also cured him of his leprosy. Thus came the name Suraj Kund and the city being named Gwalior, after the sage. King Suraj Sen is believed to have built the fort.

Saas Bahu Temple is a group of two temples was a stunner among the temples we went. The temples are believed to be built in 1093 AD by King Ratanapala, and the carvings are exquisite, and the views from here of the city is impressive.

The unique part is the name of the temple – Sas Bahu which means Mother in law and Daughter in law. However, the story is that the temple could have been named ‘Sahastrabahu’ which means 1000 arms and in due course being called Sas Bahu.

Teli Ka Mandir was built sometime around the 9th century, Teli means ‘oil dealer’, and is believed to have been built at the expense of the oil dealer. Another story is ‘Taali’ also known as bell could have lead to the name. The tall temple boasts of the Dravidian style of sculpture along with Aryan style – a combo which is not seen much in North Indian temples. By the time we went there, the temple had closed so we couldn’t explore how it looked on the inside.

Gurudwara Data Bandi Chor Sahib has a fascinating story of coming into existence. Guru Har Gobind Sahib was imprisoned at the fort, and the Gurudwara was built around October 1619 to celebrate his release – where he also managed to free about 52 other kings from the prison. Bandi means imprisoned, Chor means to release and therefore the name. Like every Gurudwara, this place is so peaceful and pretty. The whole story of Guru Gobind coming to Gwalior because of King Jahangir and everything that surrounds it is an interesting read in itself.

Other places to visit in and around Gwalior

Jai Vilas Palace and Museum which is still the residence of the Scindia’s family is a great place to start exploring the city. It has a lot of stories to tell about the Scindia family and the luxurious lifestyle they lived. It houses many exciting things that were used by the royal family which is a treat to the eyes.

Sun Temple aka Konark Temple replica is a place you will want to visit in Gwalior. Built by GD Birla in 1988, the temple is made out of red sandstone, and the insides are in white marble. Don’t miss the peacocks here 🙂

I’ve added Mitawali to my list of my favourite places of historical significance. Never did we know, until we got there, that the Ekttarso Mahadeva (Shiva) temple is the inspiration behind the looks of the Indian Parliament. There is also another temple in Jabalpur called the Chausath Yogini which is circular and similar to this one. Built around 1323 AD, you can sit and enjoy some panoramic views of the villages from here.

As you can see above, there are 64 chambers inside the temple which once used to house 64 Shiva lingas and the centre being the sanctum sanctorum. There is a priest/guide who explains the significance and performs the puja.

The Mughals have damaged the main temple entirely. It also seems like this was a mini fort where staples could have been stored those days. A definite must visit 🙂

Batesar Temples is a place which will blow your mind. Once upon a time, this temple complex contained around 200 Shiva and Vishnu temples. It was in complete ruins until a few years ago and also a place where many dacoits used for all their mischievous activities. Thanks to Mr. KK Muhammed from ASI, who negotiated with the dacoits explaining the importance of the history and restored it.

Tomb of Muhammad Ghaus and Tansen is another important landmark that you can visit. Ghaus helped Babar in capturing the Gwalior Fort while Tansen was one of the nine gems in Akbar’s court who was known for his sweet voice. It is believed that once he lit the lamps with his singing.

Rani Lakshmi Bhai Samadhi is another place I wanted to visit. Her inspiring life wanted me to visit the site which is in Phoolbagh area in Gwalior. She died at the age of 30 fighting the British. A queen who was known for her bravery and strategy, this place does make you feel inspired.

We missed visiting the Gujari Mahal as they close at 1700 hrs. We visited the Bahadura Sweets Shop to try their famous Desi Ghee Ladoo. Try the Poha, Samosas, Kachoris from small vendors to enjoy local food. There is 10D if you want to enjoy some music and drinks and regular restaurants to have North Indian food. And we did not find anything interesting to shop in Gwalior though you can visit Sarafa Bazaar. Also, if you have more than two days, do visit Orchcha, Jhansi, Ujjain and Khajuraho to explore Madhya Pradesh.

Check out our stories on our Instagram Page (way more pictures :D) and do let us know if you have any questions.

Pin things to do in Gwalior for later:

2 thoughts on “Once Upon A Time In Gwalior”