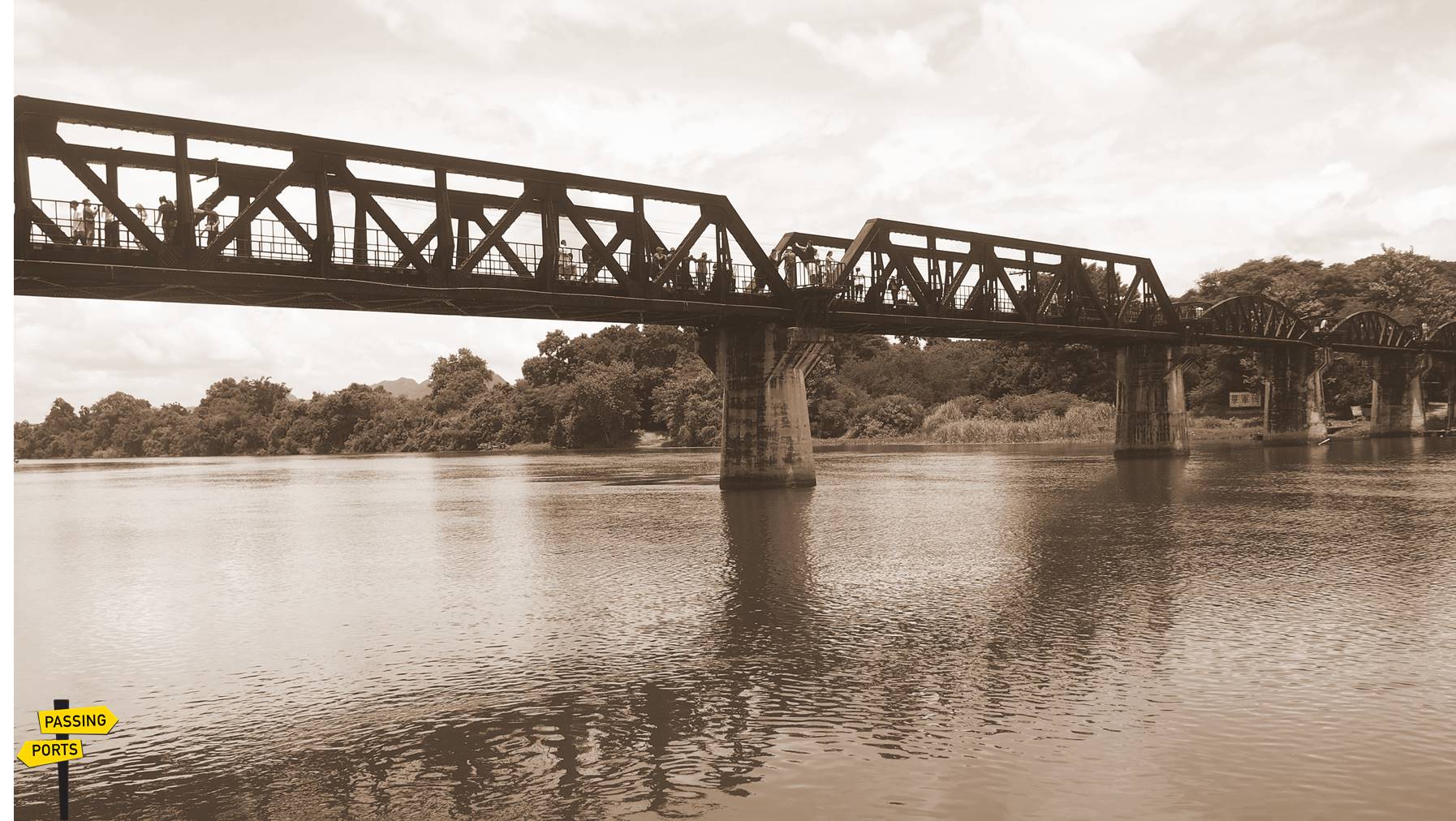 As is the case during almost all our trips, we are always short on time and Bangkok was no less. We spent two nights and three days in Bangkok, and that obviously wasn’t enough. Anyway, we decided that we’ll do the Damnoen Saduak floating market near Bangkok and the bridge over River Kwai on the same day, knowing fully well that the day was going to be hectic. But then, we knew at the end of the day that InterContinental Bangkok would more than make up for it!

And before we get into the details, here is some quick info.

How we got there: By private car

Time: About 10 hours. The entire distance is around 350 kilometres (round trip) 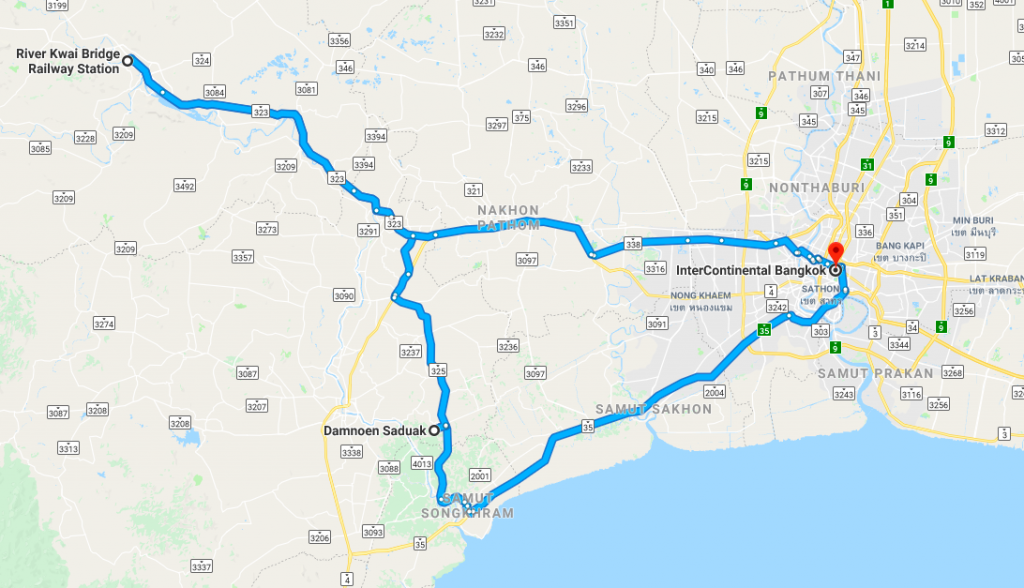 We were ready at 7 am to hit the road and had organised for a private car for the day. The driver was on time, waiting for us in the lobby and we left immediately. It was a two-hour drive to the Damnoen Saduak floating market and we got there around 9 am, as planned.

Note: We realised much later that there are many entry points to the same market.

We got down from our car, crossed a few market stalls where a lot of artisans were working 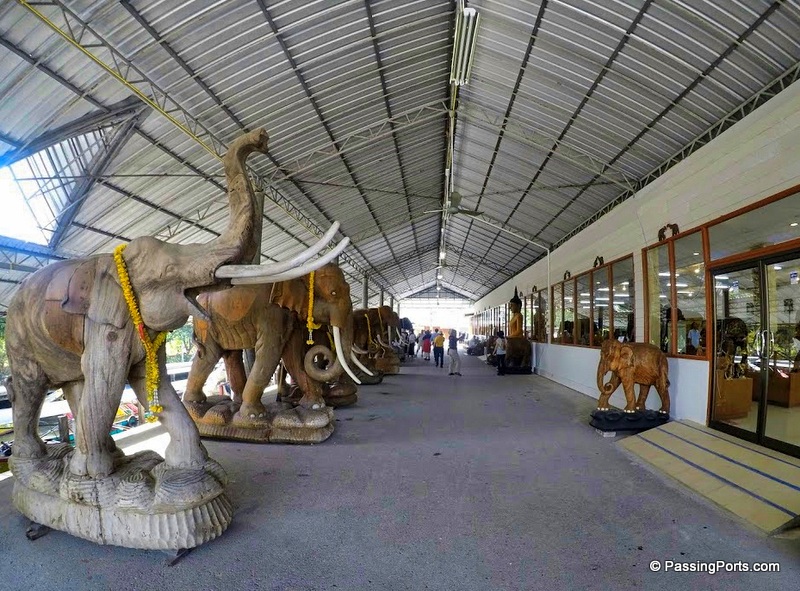 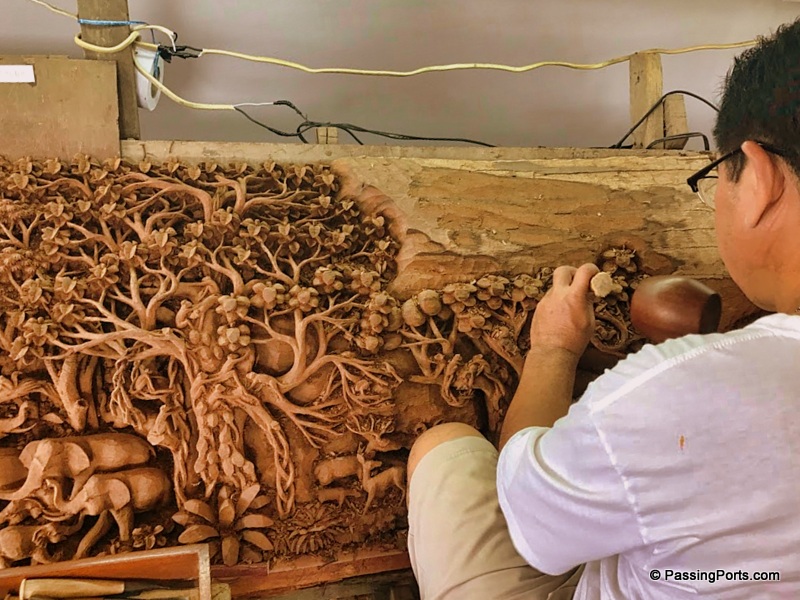 and in no time, we were inside one of those longboats to explore this popular market that is famous here, especially thanks to James Bond! 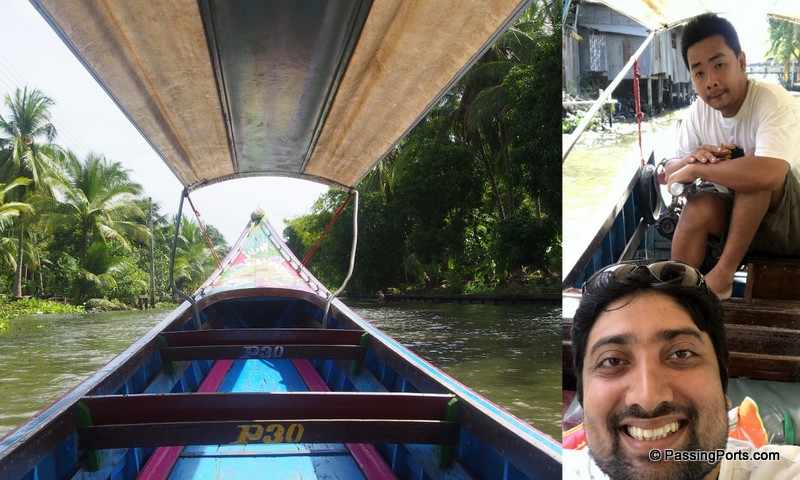 Towards the end of this short ride which lasted about half an hour, we were taken near the commercial markets, typically targeted at tourists. 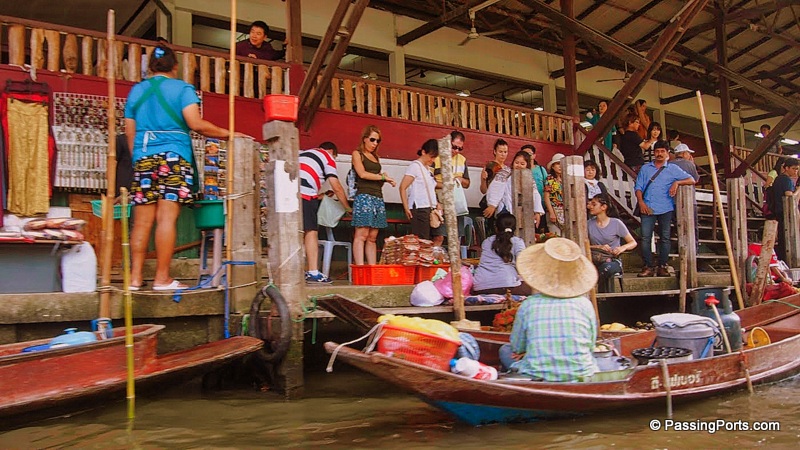 We got down here and on climbing the stairs you see in the image above, we found even more shops selling souvenirs of different kinds. 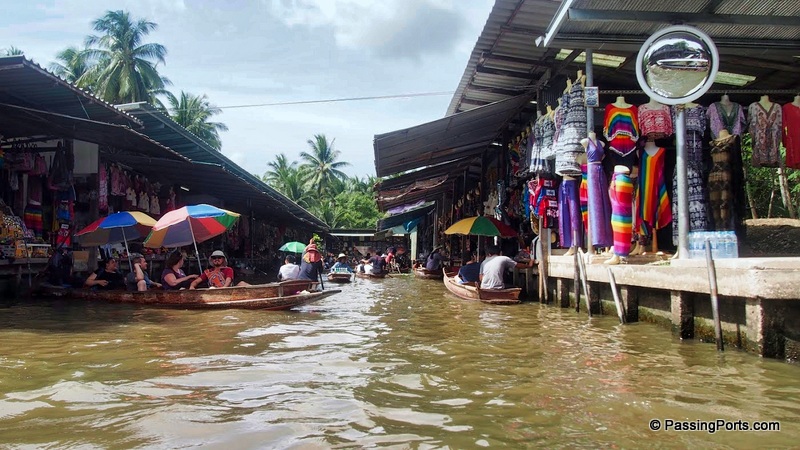 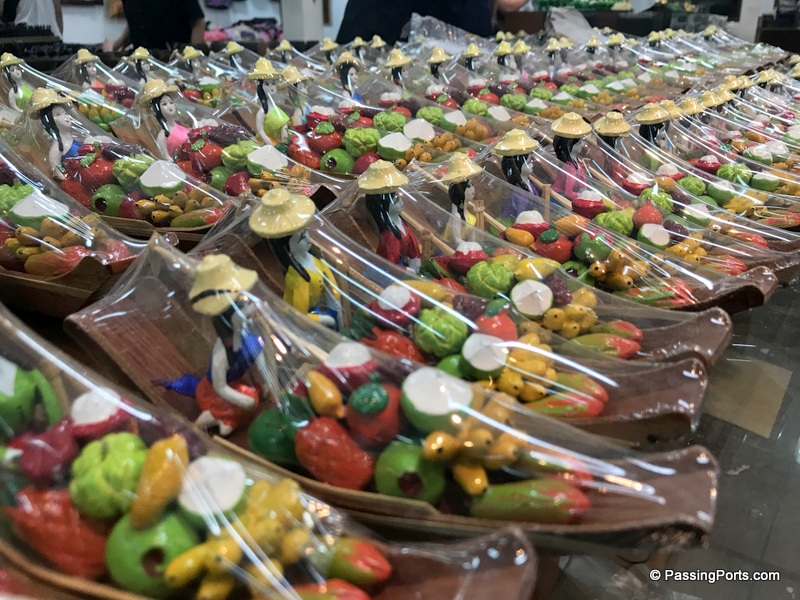 Preethika even found her favourite bag section. They all seemed quite over-priced, so we left the place quickly, after buying a nice colourful hat for Preethika, you’ll see her wearing that in the pics below. 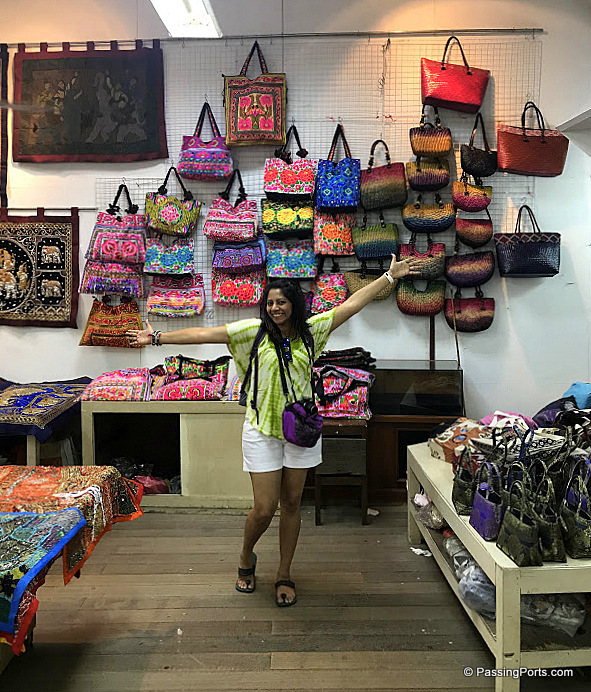 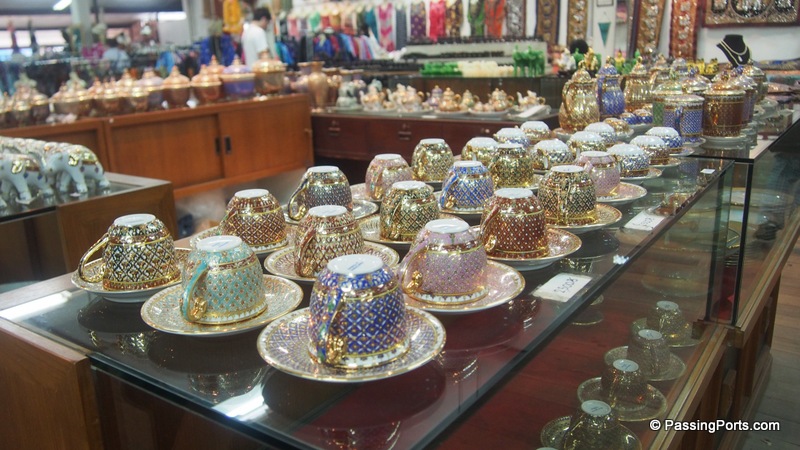 We soon stepped out and walked around the shops checking out the different curios available. 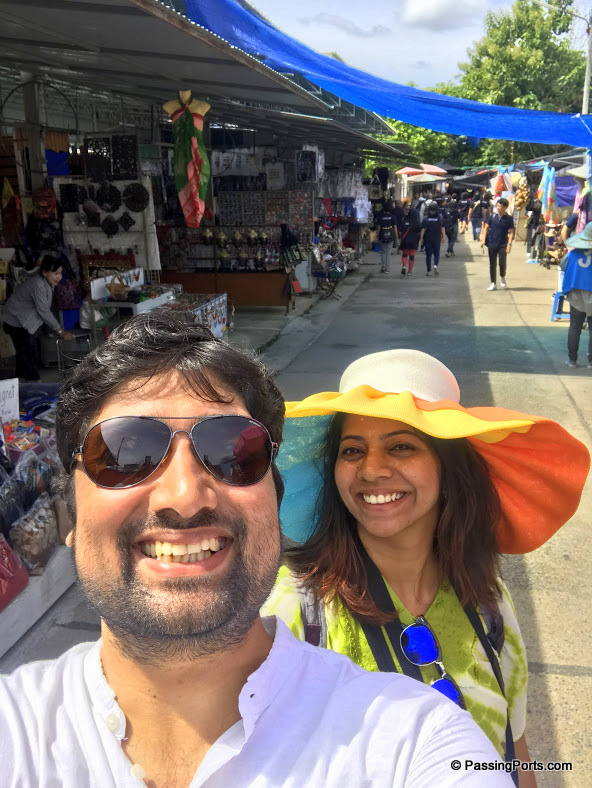 Everything is terribly overpriced around the Damnoen Saduak floating markets, so careful folks!

We then continued on our way to a place that holds a place in our history books. The bridge on the River Kwai. 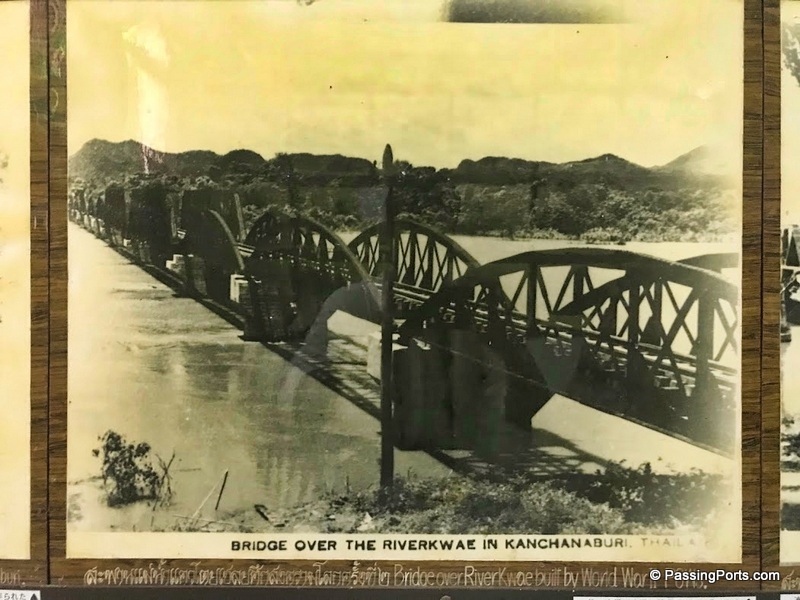 Situated in the Kanchanaburi Province of Thailand, the Bridge over the River Kwai was built by the Japanese in 1942 by forcing allied prisoners of war the 258-mile Death Railway. The railway line was meant to transport cargo daily to India, to back up their planned attack on India.

About a hundred thousand conscripted Asian labourers and 16,000 prisoners of war died on the whole project. 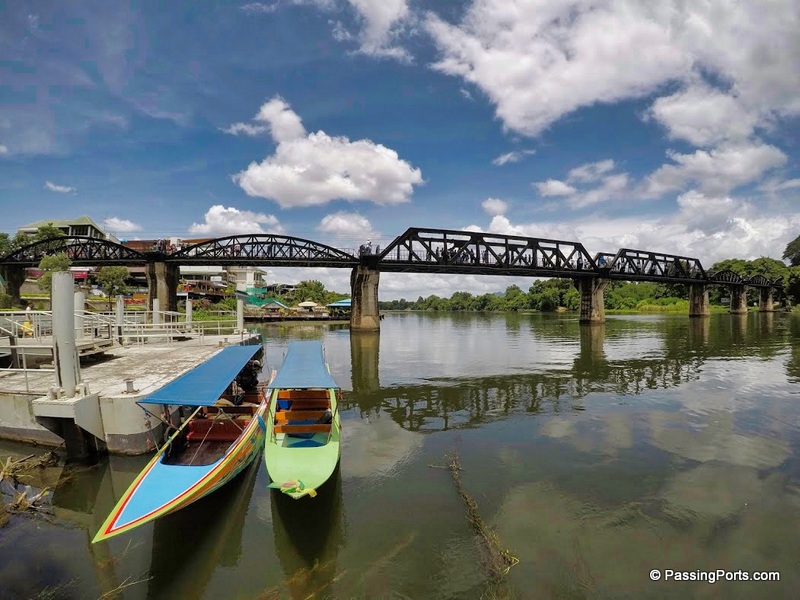 This pic was one of our favourites from our trip to Thailand. We took this from the restaurant by the river, and perhaps the best view of the bridge as well.

Note: Lunch was a part of the package, but there was nothing vegetarian in this restaurant but for fruits. That definitely was a dampener. 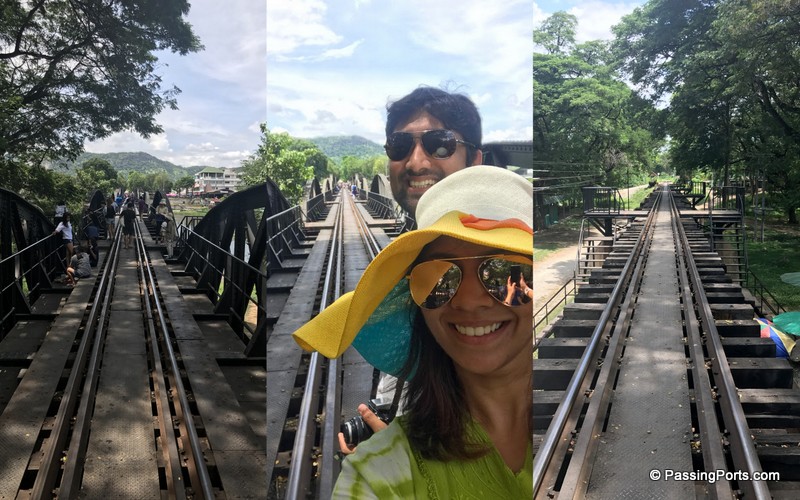 There is a museum nearby with a lot of pieces of history from the Second World War. Lots of ancient cars and bikes used during the 2nd World War were a part of this museum. The museum also housed ship anchors of many sizes and equipment used in the torture of prisoners.

We’ll spare you those pics and leave you with just the one below. Visiting that museum was quite a sombre experience. 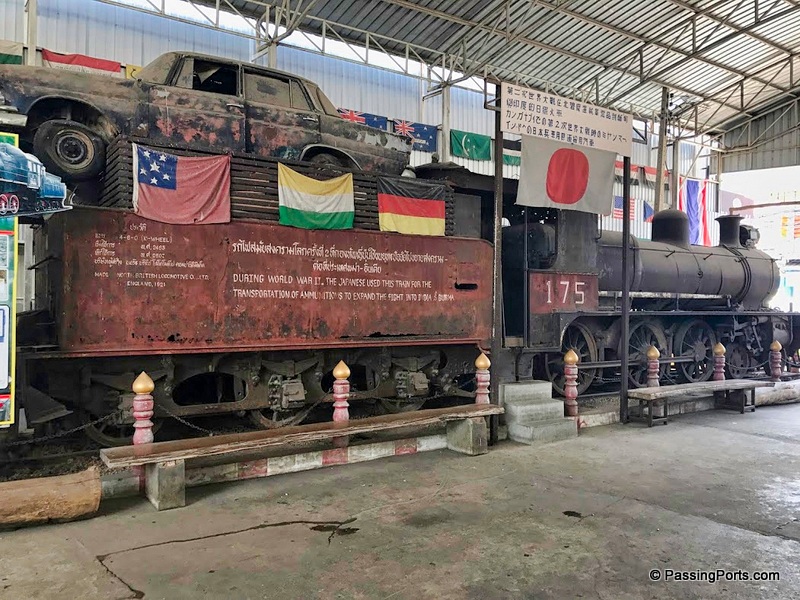 We then moved on to see the Kanchanaburi War Cemetry, which is a short drive away from the Bridge over the River Kwai. 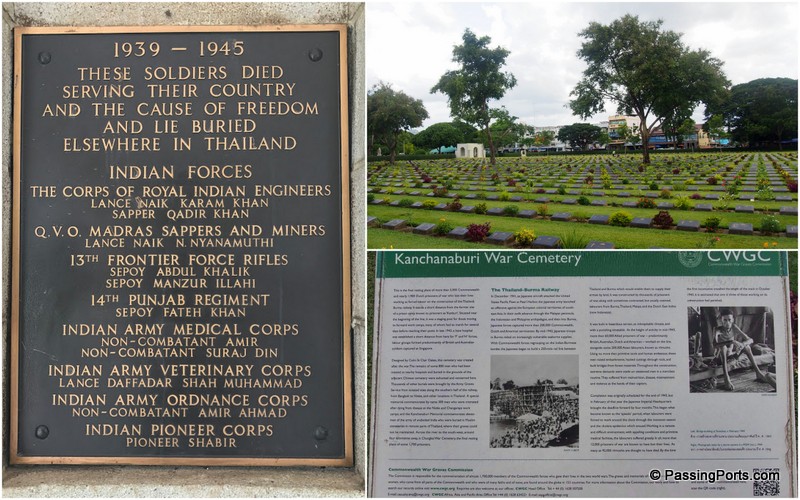 The Kanchanaburi War Cemetery, also known as the Don-Rak War Cemetery is the prisoner of war (POW) cemetery for victims of Japanese imprisonment while building the Burma Railway. There are 6,982 POWs buried there, mostly Australian, British, and Dutch.

Felt proud to see this special plaque mentioning the services of the Indian Army.

Most of the activities that one can buy online suggest that these two be covered across two days, while we managed to do the same on the same day. We would highly recommend that you do the same, especially if you don’t have much time in Bangkok.

P.S: We were of the opinion that THB 4500 for this activity might have been on the higher side. Have you done this activity? Is there a more cost-effective way of doing the same thing?