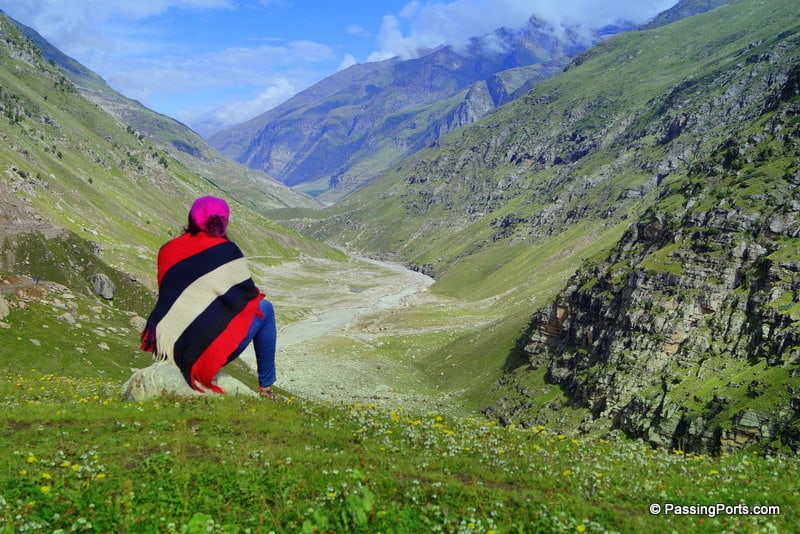 Six days in Spiti Valley – Imagine travelling to an unknown destination for a week which is off mobile connectivity, internet and other worldly pleasures. It’s all about you and the true beauty of nature. Ready for a lifetime of an experience? I surely was not until I saw it for real.

I had the opportunity to spend a week in Spiti Valley, Himachal Pradesh through Transforming Travels. These guys organize small group tours (private as well) with focus on eco-friendly and responsible ways of travelling and ensure visitors cause no damage to Mother Nature. While I try to do my bit by being a nature-friendly traveller, associating with Transforming Travels only seemed natural.

Get ready as we travel through Spiti, one day at a time. This will help you plan the days while I shall be elaborating about each of these places in separate posts.

We started at 04:45 from Old Manali. Our first stop was for breakfast at 07:00 on the Leh-Manali highway. From here it took us an hour to reach Rohtang Pass. It was cloudy the whole time we spent there and we left from there to Kunzum. The drive was absolutely beautiful – the landscape was continuously changing from lots of greenery to snow-capped mountains to rivers flowing rapidly to almost desert-like barren lands. If you shut your eyes even for a minute, you were missing something beautiful and I had my eyes wide open all the time! where you can notice how the landscape starts to change. This was a road trip, but without roads.

Before Kunzum Pass which is about 70 km from Rohtang, we stopped at Kunzum Dhaba at 10:30 in Lahaul to recharge ourselves with chai and Maggi. The route was bumpy with stones of all shapes and sizes for roads but the views were just fantastic. For lunch, we reached the famous Chacha-Chachi Dhaba in Batal (Manali Khab Link Road) at 13:15. It took us another hour from the Dhaba to reach Kunzum Pass.

From Kunzum, the drive to Kaza was another 2-3 hours. Once we crossed the Lossar checkpoint, we were in Spiti Valley. We checked into Kunphen Sakya at about 17:30. We stayed here for two nights.

We started at 08:00 in the morning to visit the Key (Kee) Monastery. Key Monastery is the biggest monastery in the Spiti Valley and is a famous religious training centre for the Lamas. The views from here were spectacular. From Key Monastery, you can go up to another village called Gete which we couldn’t go due to rains.

From Key, we left to Kibber village (14,010 feet) which has about 77 families in all living there and is 20 km from Kaza. We simply walked around the village which lead us to lush green fields. We continued walking all the way to Chicham Bridge which is Asia’s highest suspension bridge.

We returned to Kaza by 16:00 and relaxed a bit before setting out to explore the small hippie town which has a market (Himalayan Cafe was my favourite) and amazing views all around you.

We started from Kaza at 08:30 and reached Tabo village at 10:30 with a few pitstops to take pictures. We spent the first half of the day exploring the village and the monasteries, had lunch at around 13:30 in one of the restaurants and left to Dhankar village which is about 35 km away.

We reached Dhankar Guesthouse by 15:00. The views were just amazing, so when you do head there, ensure that you don’t fall asleep! Dhankar village used to be the traditional capital of Spiti Valley. Nestled at 12,774 feet, the Dhankar Monastery housed the Dalai Lama in 2004. The place also offers the best views of the meeting point of Spiti and Pin river. While you are there, make it a point to visit Dhankar Lake, which is short trek that one needs to take from the village.

We started from Dhankar at 08:45 and crossed many beautiful places in the Pin Valley National Park, especially Lingti. We reached the Kungri Monastery in Valley at 10:00. This is one of the most beautiful monasteries you will come across in Spiti.

After the monastery, on the way to Demul, we crossed a small suspension bridge in Upper  and reached Mudh Village for lunch. After lunch at Tara homestay, we walked around Mudh village, sat staring at a small waterfall, walked around the fields taking in the serenity and the calmness around and left to Demul Village.

We reached Demul at 18:45. Each homestay could house two people, so our group split up and stayed in different homestays for the night. This was a great way to spend time with the local family there, understand their lifestyle, play with the kids, cook and experience a different life.

One thing about Demul is that it was one of the first villages to be fully solar-powered and had dry toilets. Dry toilet – as the name suggests is a room built a little above the ground and the human excreta is mixed with manure to ensure it doesn’t smell and gets reused. Water is scarce in Spiti and so the people use it with utmost care. Interesting isn’t it?

We left Demul at 08:45 and reached Hikkim at 09:45. Hikkim houses the World’s Highest Post office at 14,567 feet. While here, I got to try something new – the Sea Buckthorn Chai. It was different and yummy! Once we sent out postcards to our loved ones, we left towards Komic Village.

Komic village is known as the highest village in the world at 15,027 feet connected via motorable road. We visited the monasteries here, ate in the organic restaurant and were pretty much lost in the amazing views all around us.

We proceeded to Langcha aka Langza and reached the Tanzi Home Stay at 13:30. This village houses the huge Buddha Statue and is definitely a sight that you wouldn’t miss.

Started at 08:00, we were on our way to visit Chandrataal Lake. We crossed the Kunzum Pass again and stopped at Losar for lunch at 13:00.  The roads to Chandrataal were practically non-existent and we reached here at 15:30. A short trek (20 to 30 minutes) later, we reached this prettiness nestled at 14075 feet.

Sit, stare or do what you feel like as the calmness around you is sure to make you happy for being alive and to have visited here. We stayed in tents that night and the star-studded milky way skies here was so magical to me.

We started at 05:30 and we took packed breakfast to avoid the rush and traffic towards Manali. The return ride will take about 8 hours, so you can plan accordingly.

Now, just go and get Spiti’d!