We landed on 25th Sep’15 afternoon at Eleftherios Venizelos Airport. The immigration process was pretty quick and our backpacks were among the early ones to come out. We downloaded the GreekGuide app (works offline too) for Athens and other cities which has all important information one might need for the trip.

As we landed we saw Ikea which was bang opposite the airport. Since my husband had never been to one, we thought we might as well have a look at the shop and then proceed to the city. We took X95 bus at the entrance of the Airport, spent some time at Ikea, picked up a few things and then waited to board X95 again to get to Syntagma Square.

We had booked our stay with Nikolas through Airbnb and this property is close to Metaxourghio Metro Station. Took a taxi from Syntagma to find our place and checked in at about 1600hrs. Nikolas was a nice host and his place was perfect (Acropolis view from the balcony) making it a great start to the eight day long vacation.

We stepped out in an hour and headed straight from Metaxourghio to Acropoli Station using the metro. Upon reaching Acropolis, we walked all the way up starting from the Theatre of Dionysos, Herodes Theatre, Temple of Athena – popularly known as the Parthenon and the Erechtheion. Our timing was perfect – it was around sunset and the rays bounced off the Acropolis and the city beautifully!

We headed to the Museum from there and got to know more about the city, lifestyle and the Acropolis. They have restored and maintained the ruins extremely well that it takes you back in time and makes you get lost in the world of history.

Hunger pangs were on by this time and as suggested by Nikolos, we walked to Monastiraki. (Youcan take the metro to reach from Acropoli to Monastiraki.) This place was one of my favourites as it was bustling with people who were either hanging out, dancing or singing; so many places to shop and beautiful looking restaurants to dine – the perfect place to spend some great time that night.

We started by 0930hrs, had breakfast at a coffee shop in Metaxourghio, took the metro and went to Acropoli station. We started the day with the Temple of Zeus, the National Garden which was quiet and peaceful, Panathenaic Stadium which hosted the first modern Olympics, Ancient Agora & Roman Agora and the Temple of Hephaestus which is almost intact.

Post lunch our plan was to go to Mount Lycabettus which gives you the most beautiful panoramic view of Athens and end with Kerameikos Archaeological Site. For Mount Lycabettus, there are two ways to go all the way – climb or use the Teleferik. We chose the latter as we had walked enough for the day. There is a small restaurant and a St. George Chapel on top. After enjoying the panoramic view of the city, we descended and went to the metro station to Kerameikos. This area, which is to the north of Acropolis, was used as a cemetery and is along the banks of the Eridanos river. The museum at the site has burial related artifacts.

After hanging out with with Nikolas for some time, we left to Monastiraki (you know why :P) and had dinner at Plaka. We loved the energy and the vibes of this city, so before leaving to Sthamos Larisis Train Station (to Kalabaka), we spent some time at the Syntagma Square.

Note these things as they may be of help:

We spent 195€ for two days in Athens – includes stay, shopping at Ikea, souvenirs, umbrella and raincoat due to sudden rains etc and the above mentioned expenses. WiFi is available for free in almost all the coffee shops/restaurants.

TIP: As the last week of September – every year is celebrated as the European Heritage Days or Cultural Week, the last weekend is free entry to all Archeological sites.

This city is well connected, loaded with history and ruins, warm and helpful people, great vegetarian food & wine and amazing weather. What more can one ask for? We would have loved to spend another three days at least at Athens and I really hope there is a next time 🙂

Founder of Passing Ports, Preethika is a traveler whom you just can't ignore. A juggler between office hours and personal life, nothing gets her more excited than exploring new destinations and cultures. Extremely passionate about going to lesser known places, Preethika started penning down her experiences, and Passing Ports is the result of that love for travel, thus inspiring others to experience a life beyond the rants of our daily lives. 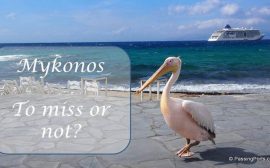 Mykonos – To Miss Or Not! 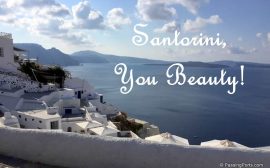 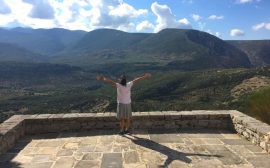 A Day Trip to Ancient Delphi and Hosios Loukas

What you see behind me is the temple. To be honest

Last year this time around, we took a trip, for th

And we finally #travelled 😍 Stay tuned to wher

Until 2019, we took travel for granted, that was u

🌼 We love the sun, the shine and everything aro

How you doin? Just came back to see if you guys ha

If I have to describe this picture in a few words

I enjoy this current stay at home, work from home